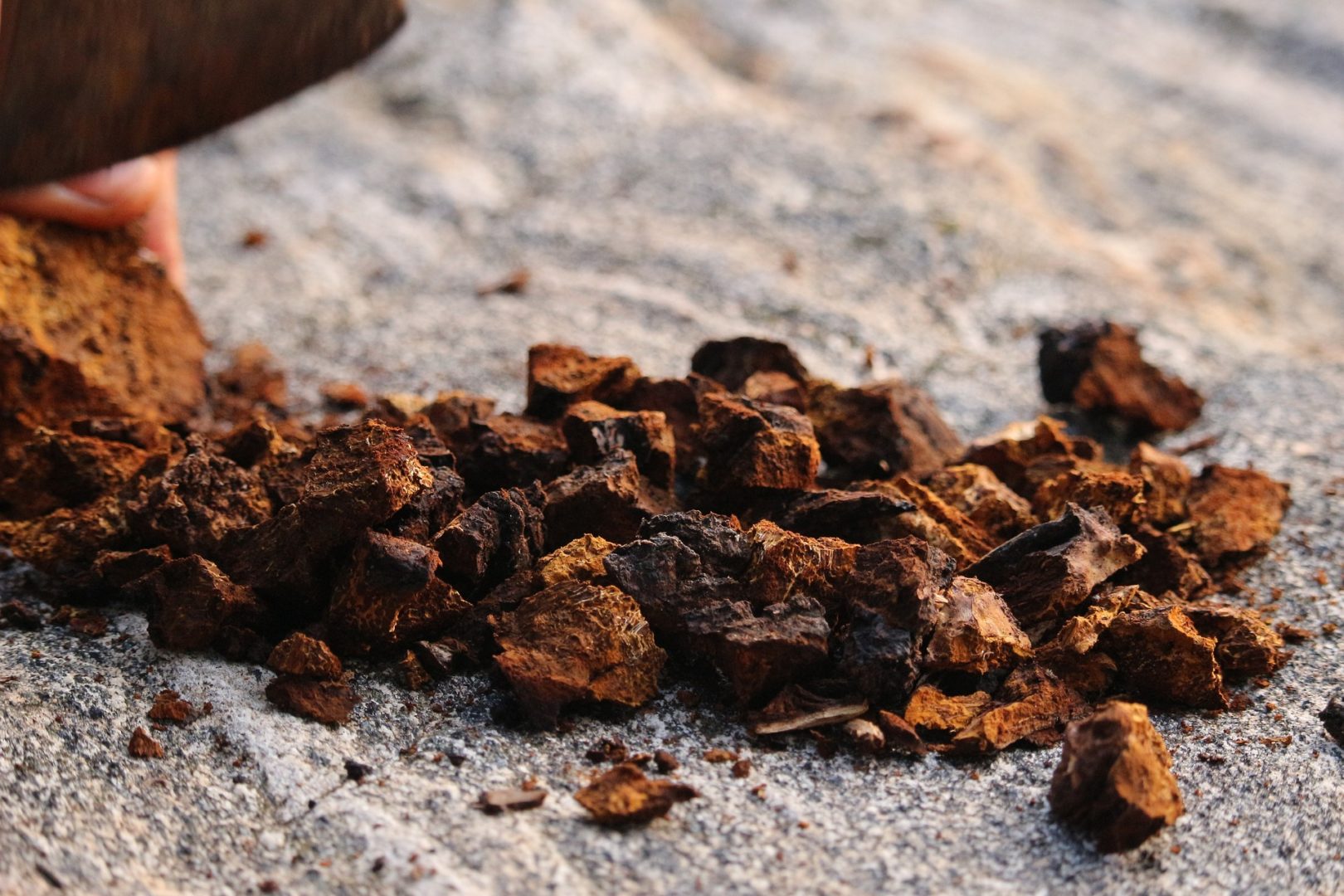 Chaga is often referred to as “the king of mushrooms”, and has been consumed in the East for many years because it is loaded with amazing health benefits. Chaga typically grows on birch trees in cold climates, and has the appearance of burnt charcoal because of the massive amounts of melanin it holds.

The mushroom is treated with hot water or alcohol to break down its tough cellular walls, making its benefits available for human consumption, usually in the form of tea. This is followed by a process called sublimation, which involves drying out the mushroom to totally preserve the nutrients and then crushing the chunks with industrial grinding machines. This produces pure chaga extract powder with no unnecessary preparation or additives.

Chaga tea or coffee may seem like a new idea, but in fact chaga was used as a coffee substitute during World War I and II, so it has been around for a while, but we are only now beginning to appreciate its significant health benefits.

What are some of the health benefits of chaga? It’s important to note that this ancient secret ingredient is bursting with antioxidants that help to rid the body of disease-causing free radicals, and it is commonly used to help treat and prevent heart disease, diabetes, liver disease, parasites, and stomach pain. But that’s just the start of what this mushroom superfood is capable of.

The magical chaga mushrooms have anti-viral abilities, with scientific research published in 2015 finding that extracts of chaga had an anti-viral effect on Human Immunodeficiency Virus (HIV) Type 1. Tests using animal cells have also shown that it has anti-viral effects on the Hepatitis C virus. In this test, the chaga extract was able to decrease the infective properties of the Hepatitis C virus by 100x in just ten minutes.

The multi-purpose mushroom is rich in Beta-D-Glucans, which helps to balance the response of the body’s immune system. This means chaga helps to boost the immune system when needed, but also helps slow it down when it’s overactive. This is a very rare quality that makes this mushroom truly special.

In a world where instances of poor mental health are on the rise, it’s useful to know that chaga is an “adaptogen”, which scientists define as a substance that improves the “state of non-specific resistance” in stress. Adaptogens enhance the body’s natural response to physical, mental, and emotional stress without directly altering your mood, but instead help the body to function well in a stressful environment.

In addition to its amazing preventive and disease-fighting qualities, immune-boosting abilities, and stress-busting function, chaga has also been shown to help suppress chemical mediators that are known to cause inflammation, which contributes to positive gut health, and can help those who enjoy working out to manage the often painful DOMS (Delayed Onset Muscle Soreness) experienced 24 to 72 hours after strenuous exercise.

In tests, not only was chaga proven to help reduce inflammation, but it also aided the body’s use of glycogen in the muscles and liver, while reducing lactic acid levels in the bloodstream, resulting in less fatigue and better endurance. A perfect combination to help boost cardio and weight training performance.

If you’re thinking it all sounds too good to be true – wait, it gets better. The disease-fighting chaga mushrooms are low in calories, high in fibre, and free of fat, sugar, and carbohydrates, so adding them to your diet for a much-needed health boost really is a no-brainer.