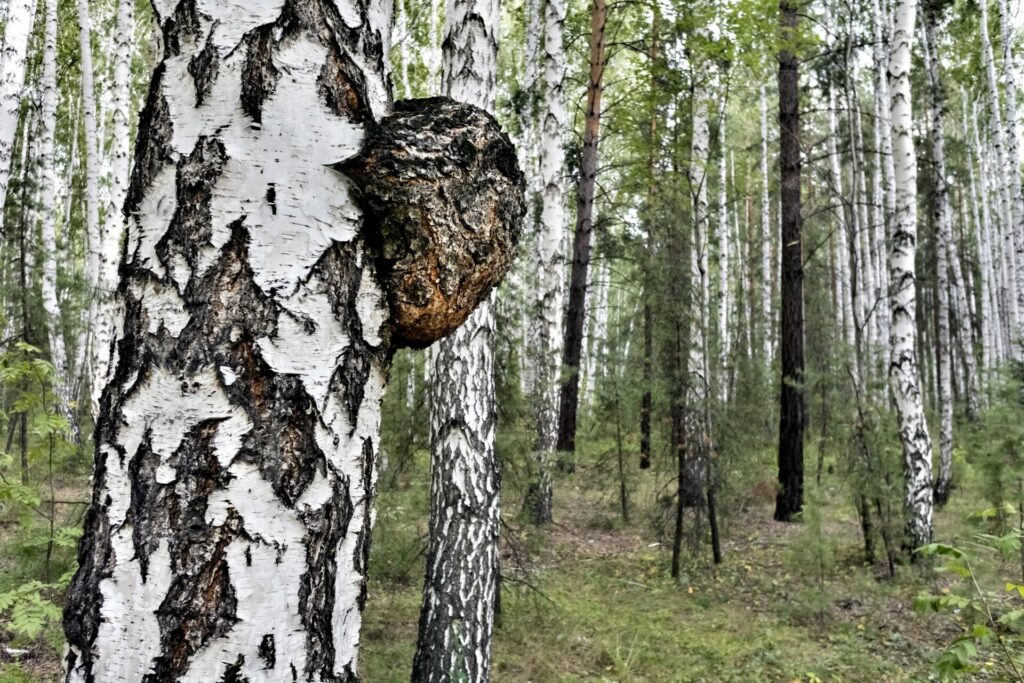 Everything You Need To Know About The Chaga Mushroom

Chaga – referred to as “The Diamond of the Forest” in Japan, “The King of Plants” in China, “A Gift from God” and “The Mushroom of Immortality” in Siberia – is revered for its reputable roster of health benefits.

Renowned as a legendary dietary staple, chaga’s medicinal uses date back thousands of years, where its historical application in folk medicine points to its therapeutic potential.

In Siberia, chaga was seen as a medicinal fungus used to treat a variety of ailments, including stomach diseases, pain relief and blood purification. Historically in Russia – where the word “chaga” originates from the indigenous term “чага” – the mushroom was used as a remedy for cancers, including breast cancer, gastric, stomach, skin and rectal cancers, where rumour has it Russian leader, Tsar Valdimir Monomakh, used to cure his lip cancer.

As a powerful, nutrient-dense adaptogen containing 215 potent phytonutrients (including B-vitamins, minerals, enzymes, antioxidants), chaga has been the subject of decades of modern scientific research which has proven the arguable benefits of regular chaga consumption.

The Otzibrew chaga – harvested from Siberia, where it cultivates on the outside of Birch trees – has been claimed to heal the very trees it grows by entering damaged or splintered wood as spores and repairing the bark.

Declared as “an excellent source of manganese” by the Food Standards Agency (FSA) in 2018, Ötzibrew Chaga can provide adequate dietary doses of manganese in every serving.

Manganese is an excellent all-rounder essential in the function of a wide range of chemical processes. As an important trace mineral, it works to activate enzymes in your metabolism, such as carbohydrates and cholesterol, which directly impacts your energy.

As an important cofactor, manganese helps to kickstart a number of vitamins, including vitamins C and E, and aids in the digestion of protein and amino acid. Not only that – manganese is crucial in the formation of bone cartilage, bone collagen and bone mineralisation, where healthy levels in our diet has shown to improve our overall bone health. Without it, our bodies develop an altered relationship with a growth hormone involved in bone formation, called “somatomedin C”, as learned from a study on manganese-deficient rodents.

A study conducted on amnesic mice, who were given regulated doses of chaga for a week long period, found significant cognitive enhancement as a result. In people, chaga consumption can improve brain health due to the mushroom’s antioxidants which reduce oxidative stress. Chaga also increases the brain’s acetylcholine levels, that act as neurotransmitters which influence our learning and memory.

Chaga contains polysaccharides and is known to help fight infection by creating cytokines, which mediate and regulate our immune system. The release of cytokines helps to strengthen the body’s defence against mutated cells and harmful bacteria by working to stimulate skin cell recovery and the production of white blood cells.

The antioxidant properties of chaga naturally protect healthy cells from damage and help to fight against free radicals – which, when left in the body in high volumes, can contribute to diseases like diabetes, heart disease and cancer.

Chaga has an Oxygen Radical Absorbance Capacity (ORAC) value of 146.700 which is one of the highest in the world.

In short, consuming foods rich in antioxidants, like chaga, can help combat against degenerative diseases by eradicating surplus atoms – free radicals – from travelling around the body, destroying DNA structures and damaging cell membranes.

It’s long been argued that chaga has anti-cancer benefits which are attributed to its immune-modulating triterpenoid compounds.

Studies suggest chaga has anti-cancerous effects in lung, colon and cervical cancers, due to antioxidation which prevents tumour cell development.

In one study, tumour-ridden mice who were administered chaga experienced a 60% reduction in tumour size and mice with tumours in multiple parts of the body had a suppression in the cancer’s progression.

Beta glucans – known as b-glucans –found in chaga are known to lower cholesterol and replaces LDL (the bad cholesterol) with higher levels of HDL (the good cholesterol). They also act as a prebiotic which feeds friendly bacteria in our digestive systems and contributes to a healthier gut microbiome.

Melanin – a phenolic pigment located on the surface of the mushroom responsible for its distinctive charcoal-colouring – creates a radioprotective effect once indigested. Chaga’s high concentration of melanin – among the highest known – can offer protection against radiation due to prevention of oxidation and immunomodulation.

In a study to test the radioprotection action, mice who were exposed to 50mg/kg of melanin increased the survival of mice by 100%.